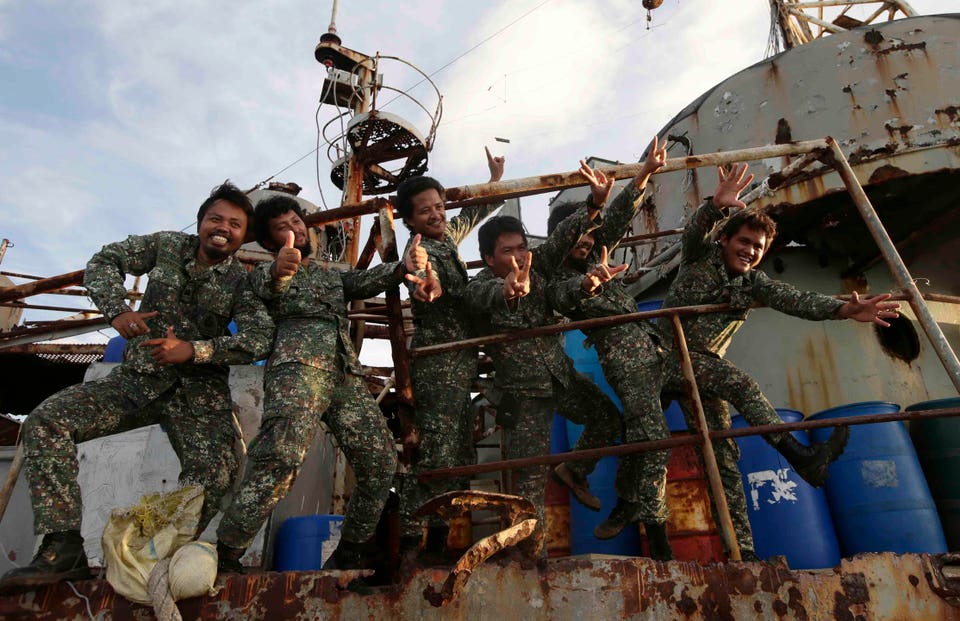 China is stepping up its actions to deny the Philippines access to areas within the Philippines’ Exclusive Economic Zone (EEZ). The Spratlys, an area in the South China Sea, is thought to be rich in oil and gas. In recent weeks and months, Chinese Coast Guard (CCG) and People’s Armed Forces Maritime Militia (PAFMM) vessels have actively challenged Philippine actions in the area or positioned themselves to deny access to military craft and civilian fishing vessels. Only on Monday did the US State Department speak out against China’s actions. The US must staunchly support Philippine maritime and territorial claims in the South China Sea. At a time when Russia is egregiously violating Ukraine’s sovereignty, US support for Philippine sovereignty is particularly critical.

The US State Department’s statement this week focused on two recent conflicts between the Philippines and China in the Spratlys. The first was a CCG challenge of a regular Philippine re-supply run to the BRP Sierra Madre, a World War II-era former US Navy ship that was intentionally moored in 1999 on Second Thomas Shoal (Ayungin Shoal). Eight marines subsist in torrid conditions on the decrepit vessel, which serves as the closest military outpost to China’s militarized, artificial island at Mischief Reef. In 2016, an arbitral tribunal ruled that China’s artificial island-building program is illegal, and nullified China’s territorial and maritime claims in the Spratlys. The Tribunal also found the Second Thomas Shoal and the waters around it to be part of the EEZ and continental shelf of the Philippines. China has condemned the ruling. The US has repeatedly expressed its support for the tribunal’s decision.

On Saturday, December 17, a CCG vessel made radio challenges to a resupply boat bound for the BRP Sierra Madre. The same CCG vessel had forcibly stolen rocket debris from a Philippine Navy vessel last month. CCG personnel asserted that the civilian vessel, which had been contracted by the Philippine military, was in an area “under the jurisdiction of the People’s Republic of China.” They said they would allow the delivery of supplies, but threatened that bringing construction material “will be dealt with.” The CCG vessel then shadowed the Philippine supply boat, sailing dangerously close to try and disrupt the mission.

Meanwhile, as recently as Sunday, about 20 Chinese vessels swarmed Sabina Shoal near Palawan, only about 65 kilometers from the Sierra Madre. Others were anchored at nearby Iroquois Reef, only about 37 kilometers from two Philippine outposts at Lawak and Patag Island. According to satellite imagery, the vessels began gathering at Iroquois in April. Beijing claims these areas are traditional Chinese fishing grounds. However, the boats are part of the PAFMM, are armed and have surveillance equipment aboard, and are restricting access to key areas of the South China Sea. China regularly deploys the PAFMM to intimate the population or government of a disputed region and establish Chinese claims to the territory. PAFMM vessels are capable of swiftly interdicting Filipino fishing vessels, military resupply boats, or hydrocarbon exploration vessels. According to maritime expert Jay Batongbacalthe PAFMM vessels are positioned to intervene in Philippine petroleum explorations at Reed Bank and in northwest Palawan, should China wish to do so.

On Tuesday, US State Department spokesman Ned Price called on China to respect international law, as reflected in the 2016 arbitral ruling. He also stated that the escalating swarms of PRC vessels around Iroquois and Sabina “interfere with the livelihoods of Philippine fishing communities, and also reflect continuing disregard for other South China Sea claimants and states lawfully operating in the region.”

The Chinese Embassy in Manila retorted that the US State Department had made “unfounded accusations” and was an attempt to “stir up troubles and drive a wedge between China and the Philippines.” The Spokesperson of the Chinese Embassy in the Philippines tweeted that “the US keeps meddling in the South China Sea disputes,” harming regional peace and stability, to serve its own geopolitical interests—while the Philippines and China have maintained stability in the South China Sea.

US support for the Philippines in its South China Sea disputes has reached a renewed state of urgency. First, tensions in the Spratlys are rising as China becomes increasingly aggressive in asserting its illegal claims in the South China Sea. China has recently passed several laws, including a Maritime Transit Safety Law and a new Coast Guard Law, which falsely assert that it has jurisdiction over areas of the South China Sea and that other states must request its permission to pass through them. China has recently increased efforts to intercept US and partner and allied aircraft and vessels in areas over which it claims jurisdiction. In the face of this aggression, the US must support the Philippines in asserting its right to operate in its own EEZ.

Second, the Philippines’ new President Ferdinand Marcos Jr. has renewed support for the 2016 arbitral ruling and has ramped up diplomatic protests against China’s actions in the South China Sea. This marks a change from his predecessor, Rodrigo Duterte, who tended to pacify China. The US must support the new Philippine administration in asserting the rule of law.

Third, the global context demands that the US stand up to China. As Ukraine’s President Volodymyr Zelenskyy roused the US Congress to its feet last night, Russian President Vladimir Putin was meeting with Chinese Premier Xi Jinping. The world has seen the strong consequences when an expansionist, authoritarian ruler denies the sovereign rights of its neighbors, lays a domestic legal groundwork for imperial actions, and claims a historical basis for denying civilians access to their livelihoods and food supply and ignoring their human rights . The US must reassure the Philippines that it will stand by its ally in the face of China’s continued violations of Philippine sovereignty and the rights of its people. Filipinos need the reassurance. The Philippines needs more than long-delayed words.

Pro-Trump Support Outside Mar-a-Lago Falls to Just 40 on Jan. 6 Anniversary

Tesla Will Build Heavy Trucks at a New Factory in Nevada

Like It Or Not, New Nuclear Reactors Are Coming To The US Waterfront