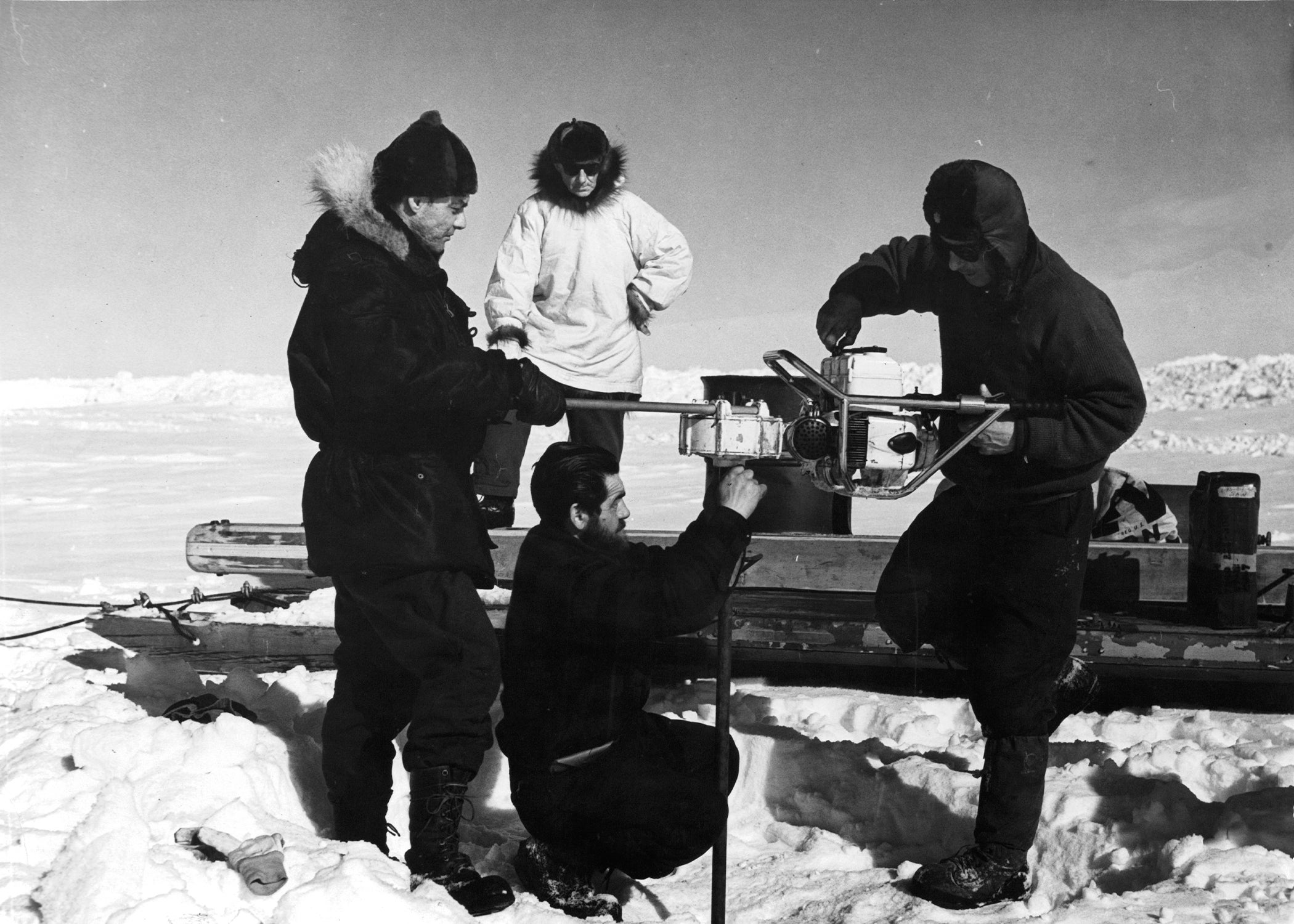 Sixty years ago, at the height of the Cold War, US military scientists achieved a major feat. They extracted a mile-long slender cylinder of ancient ice from the heart of the Greenland ice sheet—the first ice core ever to be drilled from the surface straight down to the bedrock.

For decades, much of the sample lay half-forgotten in storage. But today, it’s helping scientists reconstruct the Earth’s climate history—and potentially peer into its future.

The findings are sobering. The sample suggests that less than a million years ago, large parts of Greenland’s present-day ice sheet were totally free of ice. And there was less climate-warming carbon dioxide in the atmosphere at that time than there is today.

That raises the question: If it’s happened before, could it happen again?

“If you think about the future, with how humans put carbon dioxide and methane in the atmosphere, it’s going to keep our climate warm for a very long time,” said Drew Christ, a geologist at the University of Vermont. “And that is what could kind of melt away large parts of these ice sheets. It’s too warm for too long, and it melts.”

Christ is one of the scientists currently plumbing the ancient ice sample’s secrets. Specifically, he’s studying the bits of ancient earth and sediments at the very bottom of the ice core—the part where the ice connected to the bedrock.

And he’s made some breathtaking discoveries. The sediment is filled with perfectly preserved insects and plants, frozen in place for hundreds of thousands of years.

These little fragments of ancient life provide a rare glimpse into what the environment was like in an iceless Greenland. The clues so far suggest a tundra landscape, dotted with mosses and cold-climate plants and buzzing with midges—not unlike the ice-free zones at the edges of Greenland today.

Christ shared the latest findings last week in a presentation at the annual fall meeting of the American Geophysical Union in Chicago.

“This type of record is unique because there’s only about six ice cores collected from Greenland that go all the way down to the bottom,” he said in an interview with E&E News. “And only a few of them are covered with any sediment at the bottom of the climate record. And so this is one of the only ways that you can directly say there was no ice at this spot in Greenland.”

It’s a discovery that waited decades to be unearthed—and easily might not have happened at all.

The ice core itself is the product of a strange period in US military history. It was drilled from a site known as Camp Century—a military research center built straight into the ice in western Greenland.

Camp Century was one of several US military bases erected in Greenland during rising tensions of the Cold War in the 1950s and 1960s. At the time, Greenland was seen as a defensive vantage point between the United States and the Soviet Union, and it also became the site of several radar stations intended to provide an early warning of any potential nuclear attacks.

Camp Century, completed in 1960, was officially designated a scientific research station. Under its official purposes, it was supposed to investigate the feasibility of life under harsh polar conditions by constructing a small city deep within the ice itself. The camp was complete with underground dormitories, kitchens and other fixings of everyday life, connected by more than 20 tunnels carved into the ice and powered with nuclear reactors.

But the camp had another purpose, too.

Documents published by the Danish government have revealed that the US military was simultaneously working on a secretive initiative known as Project Iceworm—plans for a network of nuclear missile launch sites built under the ice. The project was unsuccessful, largely because of dangerous and unstable conditions under the ice.

Camp Century was abandoned in 1966. It didn’t last long after that, swiftly collapsing under the shifting walls of ice.

But its scientific legacy lived on. The Camp Century ice core survived and has been used by researchers in scientific studies through the years.

It wasn’t until a few years ago that scientists rediscovered the neglected sediments sitting in jars in the storage freezer.

That was the beginning of a new corridor of interest in the forgotten samples.

“We had a meeting of scientists who were interested in analyzing these types of materials from the bottom of the ice sheet and figuring out what can we do with this,” Christ said.

Christ was a postdoctoral researcher at the University of Vermont at the time. His lab was able to obtain several small samples of the sediments—just a few inches skimmed off the top and the bottom of the 12-foot sediment core.

Trapped in the ancient dirt were the preserved remains of long-dead plants. Some of the samples were likely as much as 2 million years old. Others were less than a million.

These bits of vegetation were the first indication that this corner of the ice sheet was once a dramatically different landscape.

This part of Greenland is historically one of its colder areas, Christ added. That means it would have taken a long time for it to melt away, and a substantial amount of the ice sheet probably would have vanished in the process.

The researchers published their initial findings in a scientific journal last year.

Since then, they’ve been analyzing samples from the rest of the sediment core—all the middle sections they’d missed before. And their discoveries have exceeded all expectations, Christ said.

“As a scientist, you’re just worried that it’s not gonna pan out how you thought,” he said. “I was like, ‘There’s gonna be no plants in this.'”

But when he sat down at the microscope, he said, he was amazed to find that every sample contained ancient plants.

That was exciting enough. But then the team noticed something else. While they were sifting through the samples under the microscope, they noticed that “we would see things that kind of wiggled differently,” Christ said.

Upon closer examination, they realized they were looking at fragments of insects—evidence of animal life on the ancient landscape.

The more they looked, the more they found. The head of a midge larva swam into view. Then they saw a midge pupa, with its wings developed but not quite ready to fly.

“We’re looking and just seeing the little eye peering up,” Christ said. “Then we found a full intact beetle larva. All these little spines and these little legs and eyes—amazing.”

The team is still in the process of dating the new material, so they can’t say for sure yet how old it is. But Christ estimates that it’s likely 400,000 years old.

This time period fell during an era in Earth’s history known as an interglacial period—a relatively warm phase between ice ages. The Earth’s carbon dioxide concentrations largely hovered below 300 parts per million back then—more than 100 parts per million less than their levels today.

As far as interglacial periods go, it wasn’t the warmest. But it also dragged on for about 30,000 years—long enough time for substantial portions of the world’s iciest places to melt away.

Christ liked it to open a cooler full of ice on a cool day. As long as temperatures are above freezing, the ice will eventually melt if the cooler stays open all day.

Today’s conditions are a little different. Carbon dioxide concentrations are higher, and they’re still rapidly climbing. Some research suggests that global temperatures are rising at their fastest rates in millions of years.

Meanwhile, the Greenland ice sheet is losing around 250 billion metric tons of ice each year.

That doesn’t mean the ice sheet is in imminent danger of losing all its ice. Scientists are still investigating how fast the ice sheet might melt under future warming scenarios, a process that could take thousands of years.

In the nearer future, though, the ice sheet is expected to contribute substantially to global sea level rise. One recent study found that it’s now inevitable that at least 3.3 percent of Greenland will eventually melt away, adding nearly a foot to the ocean’s rising levels.

What happens to the ice sheet likely will depend on how quickly the planet continues to warm into the future. And that depends on decisions made today by world nations to address climate change.

A journey to the birthplace of lager beer